Skip to content
Lunde Studio is reader-supported. When you buy through links on our site, we may earn an affiliate commission from Amazon at no extra cost to you. Learn more.
I had a nice dinner with one of my good friends from the gun club, and he mentioned that I take a look at the Troy BattleMag. It got me curious, so I gathered my team of experts to test these mags out on the range. In this Troy BattleMag review, we’ll share our thoughts about it along with what’s neat and what’s not. You’ll be surprised by the verdict.

Troy BattleMag is among the top polymer magazines in the world, holding 30 rounds of 5.56 ammo. It is manufactured to function seamlessly with most carbines and rifles that include AR-15/M16, HK416, M4, and FN SCAR.

The Troy BattleMag is made from military-grade polymer that’s also widely tested by Special Ops units. The company declares it to be biological, chemical, and impact resistant as it includes an extended floor plate that acts as a shock absorber when the mag drops during reload.

A specially-designed scale pattern also gives the shooter an excellent grip even in wet and dirty situations. Despite its good polymer construction, there’s an anti-tilt follower issue that many gun buffs are complaining about.

Since Troy Industries is well-renowned as a leader in the gun industry, it’s but normal to expect only the highest quality when it comes to magazine construction. During our Troy BattleMag review, we’ve noticed that the polymer has a slimmer base plate and profile compared to its counterparts. It is also softer and lighter to carry. The scaled texture gives you a good grip, while the mag comes with a buttplate that includes a soft yet durable small tab.

For recoil reduction yet streamlined finish, check out the best best buffers for 7.5 AR pistol here.

For the interior, the Troy BattleMag has this plastic block under the catch area that we find to be reliable as it doesn’t ram the magazine too far.

It also has a built-in self-levelling follower and rail similar to other high-performing mags in the gun industry today.

The mag spring is made of heavy-duty stainless steel. The Troy BattleMag also fits quite snug when loaded. 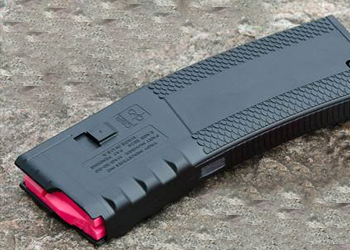 Most of my gun friends tell me that the Troy BattleMag is consistently reliable as other magazines they’ve used over the years. The anti-tilt follower and feed lips seem to be reinforced for strength and improved reliability. We like the bolstered floor plate that’s set flush so it won’t catch on other mags when pulled from the pocket. This allows you to save time during magazine changes.

When we took the Troy BattleMag out on the range, we noticed that the unloaded magazine wobbled a bit. This is a big concern when you’re running and shooting during small and big game hunting sprees.

However, we did observe that the wobble decreased as soon as we loaded the mag and even when it’s just half-loaded, so that’s a very reassuring thing. They don’t fit as tight, but it’s snug enough to use.

The Troy BattleMag doesn’t come with an impact plate, and the feed lips look like it won’t hold up to longer periods of usage. We also find the buttplate to be tough to remove so that could be an issue when cleaning or regular removing. 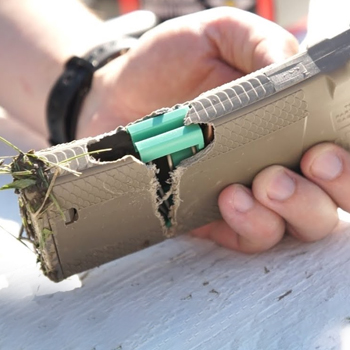 Is the Troy BattleMag Worth It?

Based on our extensive Troy BattleMag review, we think it’s a good addition to your magazine collection. The impressive polymer construction makes it durable and light enough to carry around all day when hunting. The slimmer profile and base plate allow it to fit well in our mag pouch, saving precious time during mag changes.

We also like the patterned scale that gave us a comfy grip. We’re not big fans of the anti-tilt follower, but other than that, we found no significant issues. After all, it’s all about personal preference, so give it a try and let us know your experience.

If you’re looking for additional magazines, check out this Mag577 vs Mag292 article here. 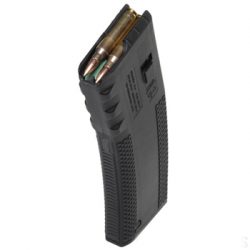