Is your ability for accurate shots affected when using rifle scopes? Getting the correct scope number for your rifle increases the accuracy and magnifies the target easier. But, really, what do the numbers mean on a rifle scope?

Let us help you understand what those digits mean and the things you need to watch out for when using your gun scope.

Understanding the Numbers On Your Scope

The numbers on your scope are the magnification power which can be either fixed power scopes or variable power scopes and the diameter of the objective lens.

The most important part of the rifle scope is the lens [1]. The objective lens is the big lens at the end, and the ocular lens is the smallest lens near your eye.

The objective lens transmits back the light to the ocular lens and magnifies it against the naked eye. This means that the scope lens magnifies the object larger than that of a human iris. 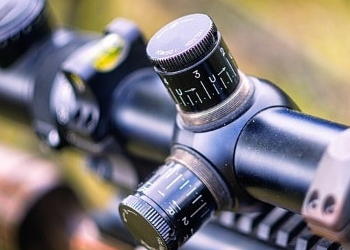 Some Factors To Watch Out For

The first number in the lens is the scope magnification, and the second number is the size of the objective lens. In a fixed power scope, the magnification is predetermined; 6 x 32 rifle scopes mean six power magnification and 32mm lens.

The exit pupil is the size of the light transmitted from the scope to the naked eye. It is important to know if the spotting scope is best for the user because a small exit pupil has low light conditions, and a large exit pupil will waste the available light.

It can be calculated by dividing the size of the lens by the magnification power. Rifle scopes have a higher magnification range than other scopes like crossbow scopes.

Normal eyesight has a field of view of 210 degrees, and as you magnify a target through the bigger lenses, the field of view gets smaller and can lead to dark conditions. Losing your front sight at a certain distance can affect the accuracy and acquiring targets. Bear in mind that a bigger field of view number can help acquire targets because as the scope magnifies, you can also see the movement of the moving targets.

Parallax is a displacement when the target is on a different focal plane. To check for parallax, quickly move your head while looking in the spotting scope. If the crosshair moves around the target even in a straight line, you need to adjust the parallax until there is minimal movement to restore the image viewed.

Parallax occurs rarely with long-range shooting because adjustments for parallax can go down to 50 yards to 150 yards at most.

The common misconception of some hunters is that a larger tube means more light.

The tube has nothing to do with how much light but its usefulness in the greater elevation adjustment range.

Tube diameter is also responsible for what power ring your scope requires and does not give as much light proportionally to the size of the tube. 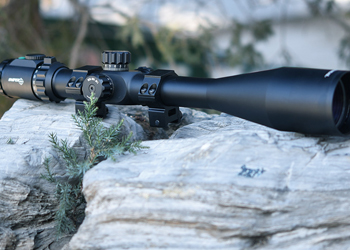 The rifle scope adjustment is made by turning the knob on the side and top of your scope. If the rifle scope is mounted, the top knob can adjust the elevation with a direction indicator to increase elevation.

The knob on the side is for windage adjustment indicating how far left or right the rifle will strike.

Available rifles on the market have different ranges in weight that you should consider to avoid an imbalance in your rifle scope. The lens size matters, so remember that the larger objective lens diameter in target shooting is heavier and smaller lenses weigh lighter. Most lightweight rifles range from 10 – 16 ounces, while heavy rifle scope weighs around 20 ounces.

The distance between the human eye and the eyepiece of the scope is called eye relief. If you experience frequent recoil in a rifle, make sure to check your eye distance with the lens.

As the large scope and magnification increases, it requires more eye relief so you will not lose the field of vision. Lower power scope has a larger range available than higher power scope. The standard eye relief in most scopes ranges from 3 to 4 inches. 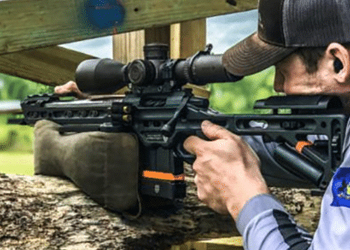 Milliradian, also known as MRAD, is a metric unit angular measurement. Using Mil Scope is popular nowadays because with mil-dot reticles, MOA-to-mil conversion is not necessary, and few clicks for correction are only needed. With these numbers on a rifle, power range shooting is much easier for the users. It is commonly used not just by the military and law enforcers but the civilians who opt to switch from MOA scope to MRAD scope.

Minute of Angle, also known as MOA, is used when determining the accuracy of the rifle scope. It is an English unit angular measurement based on a 360-degree circle and minutes in a degree. This angle is needed to compute the distance of a single target and calculate the gun scope’s bullet impact correction.

Learning the numbers on a rifle could be your first step, whether you are a beginner or an expert hunter. Dissecting the tool for more information is highly suggested by our experts to know how to work with a rifle scope.

The scope number is not just the magnification power and lens sizes nor merely for aesthetic purposes, but it gives an optimum hunting experience when appropriately used. Your ability for accurate shots will develop more with the proper use of the numbers on the scope.